Excerpt of Prince of Fools by Nancy Gideon #Giveaway @NancyGideon 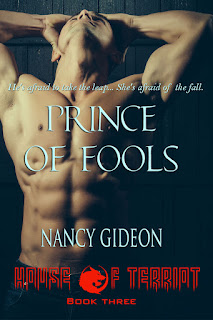 A dark prince to her Cinderella barmaid . . .

Rico . . . Prince in the shapeshifter House of Terriot

Reckless, hotheaded Rico Terriot seeks purpose and a sense of pride training the resentful guardians of New Orleans to defend a city besieged by a deadly outside force. Torn between his desire for his brother’s mate and the woman tied to the child of another, protecting their future happiness means denying his own on a dangerous path to redemption.

Amber . . . a single mother hiding a terrible past

Rico Terriot was the stuff of dreams . . . lately all of hers. But there’s no happily-ever-after for someone living in the shadows, protecting dangerous secrets that threaten her and her daughter. Dare she believe in a fairytale prince when he comes to her rescue, not knowing the price he’ll pay for making her troubles his own? From world’s so far apart, is love strong enough to hold them together . . . and keep them alive?

Excerpt from PRINCE OF FOOLS . . .
"House of Terriot" Book 3
By Nancy Gideon

Amber buffed the bar top to a mirror-like shine, motions brisk, leaning into the job with a fierce concentration. A thankless job because no matter how glossy she made it, the underlying scars and countless rings would soon reappear to spoil the perfect look she tried to maintain. Frederick Terriot was like that surface. Though dazzled by the shine, she knew what lay beneath. No matter how hard she worked to change that fact, the damage had already been done, the flaws she tried to overlook forever marring what she longed to embrace.
Rico was a dark storybook prince to her Cinderella barmaid. Behind that careless grin and sad eyes lay what his clan made him: Rich, deadly, proud, thoughtless as well as vulnerable, and as far above her and her dreams as his soaring mountaintop to her bayou. Men like Frederick Terriot didn’t truly see females like her, not as equals, not as feeling, wanting, sharing partners. He used them for the moment to fill a need, not a permanent void, not because he was cruel or insensitive, but because of who he’d been raised to be.
And that would never, ever change, no matter what she hoped, no matter what those soft, seducing lips might promise.


Her heart carried more wounds than her body, her mind not quite as many as her soul, yet still, foolishly, she might have taken a chance on this once in a lifetime prince if she were the only one at risk.  But she had more to protect than just herself. 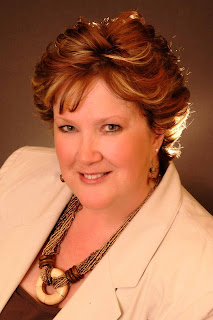 Nancy Gideon is the award-winning bestseller of over 60 romances ranging from historical, regency and series contemporary suspense to dark paranormal, with a couple of horror screenplays tossed into the mix, and is currently testing the “Hybrid author” waters.

Under her own name, she’s a top 100 Amazon bestseller with her “By Moonlight” dark shape-shifter series and is also listed on the Internet Movie Database (IMDB) for collaborating on Indie horror films In the Woods and Savage with screenwriting and ADR script credits, and a small role as “bar extra” she likes to boast about. Writing as Dana Ransom, she’s a “Career Achievement for Historical Adventure” award winner with books published in Romanian, Italian, Russian, Danish, Dutch, Portuguese, French, German, Icelandic and Chinese. Writing historicals as Rosalyn West, she’s a HOLT Medallion winner and she’s also penned regencies as Lauren Giddings. Many of her older titles (from the ‘80s and ‘90s) have been or are soon being reissued.

A prolific writer, Nancy attributes her creative output, which once peaked at seven novels in one year, to her love of history and a gift for storytelling, also crediting a background in journalism and OCD. She’s up every weekday at 4:30 a.m. to get in computer time before heading to her full-time job as a legal assistant in Central Michigan, and feeds a Netflix addiction along with all things fur, fin and fowl.