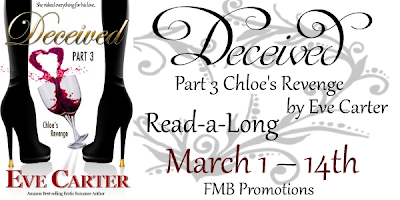 Please read on below for part 3 on the Deceived read-a-long! Also click here for the tour schedule and the next parts of Deceived and scroll below for the giveaway! 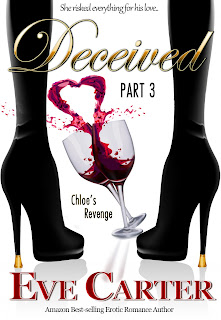 The steamy Deceived romance trilogy by Eve Carter, in the bestselling tradition of Fifty Shades of Grey by E. L. James and The Blackstone Affair by Raine Miller.

When Chloe Swanson, an innocent mid-western college graduate, lands her dream job in , she doesn't realize what kind of a ride she's in for.
It doesn't take long before her boss, the charming and sharp businessman Patrick Collins, deceives her into being part of his plan to land the biggest account of his life.

However, he never expected that he would fall for her. Suddenly, he finds himself trapped between a ruthless billionaire client, who has her own eyes set on Patrick, and his deep affection for the beautiful Chloe.

What follows is a sensual and passionate journey of self-discovery, as Chloe faces the harsh reality of jealousy, love and money in the big city.

Stimulating, amusing and highly arousing, Deceived is a romance that will excite and titillate your senses.

White beams of moonlight splayed themselves across the walls of Patrick’s opulent marshmallow bedroom in his high class contemporary penthouse apartment, shining in through the floor to ceiling windows. It was in the morning and I was wide awake. Jet lag had gotten the best of me and my internal time clock was still running on time. Rolling to my side, I propped myself up on one elbow to admire Patrick snoozing away comfortably next to me, all naked and handsome. The heat of the summer graciously allowed me an unshrouded view of his hunky body. No need for covers in this bedroom, thank you Mr. Summer Heat.
As I laid there feeling all warm and right, my eyes trailed around the room, which was quite visible in the spotlight of the moon. Pausing at one of the matted photographs on the wall, I curiously cocked my head to the side. A huge smile spread across my face as it dawned on me, that among the black and white artwork that peppered the wall, one was of the in . What a coincidence. I had never noticed it before. I had once read that when a person experiences a coincidence in their life, it’s God winking at them. It’s like knowing that you are in the right place at the right time and that's exactly how I felt in this moment laying next to Patrick. Sometimes the universe whispers to us, and we need to remind ourselves, not to forget to click the shutter. I looked over at him again and wished I had a camera to freeze this moment for eternity much like the photographs on the wall.
We are all looking for something, for someone, for anyone, until the right person comes along, as if sent on a moonbeam from heaven above, and we can see through ourselves and back again in the eyes of our true love. I smiled and nestled into the sheets, hoping the movement might stir him to wakefulness.
I loved the look of his skin, stretched tightly over a pack of muscles, calling for my touch. Last night had been incredible. He knew how to work magic on me and touch the right spot at the right time. Gazing at his hard body stretched out on the bed, his tan skin contrasting against the white sheets, I raked my teeth over my lower lip. I couldn’t resist any longer. Why was he sleeping and I couldn’t? I reached over and gingerly touched him on his bulging bicep, but he just rolled away from me onto his side. Apparently, jet lag had not affected his sleeping pattern as much as mine, since he had only been in for a few days. I pulled my hand back, sighing with frustration as I rolled off my propped up arm onto my back, flopping my head against the pillow.

Living in , but a mid-westerner at origin, Eve finds plenty of inspiration for her books in her own exciting life. Eve has always loved the arts and as a young girl, she took dance classes and spent the summers reading books from the local library. Fascinated with the written word and its power to guide the imagination, Eve started writing short stories and later took Creative Writing classes in college. Eve graduated from The University of Iowa with a B.A. in Journalism and an M.A. in Higher Education. She also has a Teaching Credential from in .