Eleven souls are shipwrecked on an island teeming with sub-human cannibals. Who will survive to tell the tale?

Please welcome author T. Briar to the blog today for a guest post about Heroes, Heroines, and Villains! :)

Hi, there. My name is T. Briar, the author of Isle of Savages. Thanks for taking the time to drop by and visit with me. I really appreciate it.
Today, I’d like to introduce you to Eric, Mia, and Keri, the hero and heroines in my new action suspense thriller novel. They’re each only seventeen years old and have the dubious honor of being the only scholarship kids on the ill-fated sailing trip. The rest of the students come from wealth and privilege.
As you can probably guess, from the outset of the trip, my charity cases were looked down upon by the silver spoons. Now they’ve all shipwrecked on an island teeming with sub-human cannibals in a survival of the fittest type situation. Yep, the trio will have to be cunning and courageous to survive the other students, the captain, first mate, and the savages.
Without a doubt, Eric was my favorite character to write. Just couldn’t help but admire how he always put Mia’s and Keri’s safety before his own in trying to protect them from the horrors they’re all facing. It doesn’t always work out for him or the girls, as you might imagine. But he always had their backs. No matter what.
Mia was interesting to write also. Although she usually deferred to Eric’s good judgement, sometimes she didn’t. And there’s this one particular time when she comes to regret it. Grievously. But still, she strives just as hard as Eric to make sure that all three of them make it off the island alive.
Keri is the sweet one. Fun, happy, carefree Keri, the one girl in all the world that thinks everything will eventually turn out all right. No matter what. Yep, this is exactly how Mia thinks of her best friend.
Except Keri secretly harbors doubts about their surviving, especially after she fails to be of any help to Mia at a time when her best friend needs her the most. Keri will most certainly seek to redeem herself for the lapse, but it could end up costing more than Eric and Mia are willing to pay.
Captain Warren and his first mate was especially cunning adversaries for the trio. How I hated them from the very beginning. They were just so despicable.
Unsurprisingly, it was the little savages that proved to be the most treacherous of all. Don’t know where I conjured them up from, but a sense of dread welled up within me from the moment they made their first appearance in the story.
No one was safe from them. That surprised me the most. As much as I’d come to care about Eric, Mia, and Keri, and fought hard in the writing to help them survive each new catastrophe, I simply didn’t know how the story was going to turn out.
Yes, as the writer, I knew how I wanted the story to end. But would it turn out like I envisioned, with Eric, Mia, and Keri getting off the island?
I wish I could tell you how it ends. But, if I did that, I would deny you the thrill of finding out on your own.
Anyway, here it is for you to peruse and decided for yourself if you want to step onto the Isle of Savages with my hero and heroines.
Thanks again for visiting with me today! 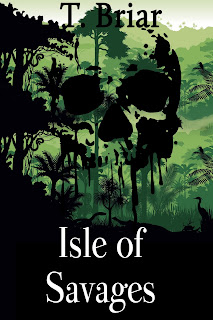 On July 20, 20— a charter school’s sponsored sail from San Diego to Hawaii hits a reef during a violent storm. Sixteen souls abandon ship. Nine students, along with the hated captain and first mate, wash up on what they believe is a deserted island.
Separated into three groups by circumstance and mutual distrust, treachery and death lurks for all. Over the course of a single day, one student betrays all the others. Another drowns. Two others get ambushed by a great white shark. And, like falling dominoes, the captain, first mate, and six students fall prey to a tribe of bloodthirsty cannibals.

In the face of almost certain death, who will escape from the isle of savages to tell the tale?

Gregory continued forward, ever wary, nerves keyed up and getting more frazzled by the second. Another twist awaited up ahead. Approaching it slowly, he duplicated the method of taking a quick peek, except this time he never withdrew his head, was instead, stunned into staring.
Tanya sat on the side of the trail with her arms wrapped around her drawn up legs, chin resting on her knees, long blonde hair hanging in tangles about her face. At some point, she’d lost all of her clothes and was completely covered in grim. Tear stains cut rivulets through the dirty smudges on her cheeks.
Gregory stepped forward and knelt in front of her. He mustered a grim smile at her ragged condition. “Tanya. Are you all right?”
At the sound of his voice, she twisted her head to look up at him with a vacant, lost expression. Slowly, her brows knitted like she was having trouble recognizing him.
“Tanya. It’s me. Gregory. Don’t you remember me?” Every nerve ending Gregory possessed pulsed with caution.
She blinked her glassy, watery green eyes once. Two lone tears spilled down her cheeks.
Alarmed at her despondency and a little irritated, Gregory placed the shotgun on the ground to grasp her by the shoulders and shake her roughly. “Tanya! Answer me! What happened to you? Where are your clothes?”
Tanya’s slack expression became more alert. She squinted, eyes flickering with recognition. She mumbled, “Gregory? Is that really you?”
“Yeah,” he answered. “It’s really me.”
“I’m so glad. Please kill me before you kill yourself. Please grant me this one last favor. I beg you. If we had time, I’d make it worth your while.”
Shocked by her words, he demanded, “What are you talking about? Tell me what happened to you?”
“They stripped me and brought me here. I tried to outrun them but they’re really fast. And…” she released her legs to let them flop open and expose her hairless slit as she lifted her chin to give a futile tug at the braided rawhide rope encircling her neck, “I can’t get this off. The other end is tied to a sapling over there.” She waved vaguely toward somewhere behind her in the dense vegetation.
The hair on Gregory’s arms immediately stood at attention. He snatched up the shotgun to stare Tanya directly in the eyes. “Who tied you up? And why did they leave you here? Tell me right now!”


Tanya lifted a shaking hand as terror filled her eyes. She pointed over his shoulder. “They did. Please kill me before they get to us. Hurry!”

Always striving for pulse-pounding action, sitting-on-the-edge-of-your-seat suspense, and hair-raising thrills, T. Briar’s mainstream thriller writing places courageous heroes and heroines in the fight of their lives against the elements, hostile surroundings, morally bankrupt villains, and any other obstacles T. can think of.

But be warned, once the wheels are set into motion with the first sentence, it’s a twisting, turning journey to the end to see who lives and who dies. And make no mistake, someone’s going to die. Some will even die badly. That’s just the way it is when fighting for survival under perilous conditions. The only question is: Will it be the heroes and heroines, or the villains?

T. Briar’s target audience is New Adults who boldly step up to meet life’s challenges with the confidence of youth urging them on.

Please checkout T. Briar’s page at http://thomasbriar.com to find out more about T. and his thriller writings. 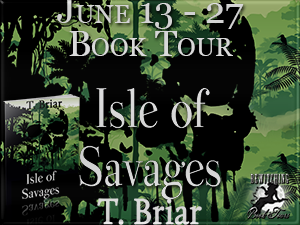